Who could have a day this bad?

I watched the first half of Gone With the Wind last night. It's been a while since I've seen the movie, so it felt a bit fresh to me. And as I watched Scarlett deliver a baby for the wife of the man she loved, escape a burning city, be kissed and abandoned by Rhett Butler, and drive a dying horse home to Tara only to find her mother dead and her father crazy, I decided I've never had a day that bad. We should all consider that comparison, even though my example is fiction. But you don't have to look very far in the world to find bad days even worse than that.

I'm very happy at the moment. So happy that I just spent the morning shining up my house and cleaning windows inside and out. It helps that it is 50 degrees F outside. This afternoon I will devote myself to oil painting.

I looked at the boys basketball statistics for the Indiana High School Athletic Association last night, and discovered that my son was listed as 38th in the State for the number of rebounds per game. This morning, the Indianapolis Star listed him as 13th in the State. Frankly, I'm amazed. His school is one of the smallest in Indiana, and his team doesn't have a very good record. Mom is pretty proud.
Posted by MauritaMason at 1:48 PM 3 comments: Links to this post

Look out, Vermeer, here I come.

I'm ready for my next form of therapy. On my lunch break, I bought a 30 x 48 inch 'gallery wrap' canvas upon which I plan to brush a masterpiece. Well, that's the plan. I'll be using a technique known as glazing, for which Johannes Vermeer was well known. Without boring you with too many details, glazing is a method by which colors are placed on a canvas in very thin layers using an oil-based medium. After a layer has dried, and another placed on top of it, the colors become not physically but optically mixed, thus creating a luminosity in the painting.

The key words there are 'after a layer has dried.' This project is meant to be a work of patience, above all else. My tendency to rush things is legendary, and I'm hoping to prove I can wait. A little.

This is why I'll be painting in my husband's heated 'shop' - the same place my cat resides. The wood stove keeps the place at an almost constant, arid 80 degrees. It's hard to say whether oils will dry faster in those conditions, but I'm betting on it. 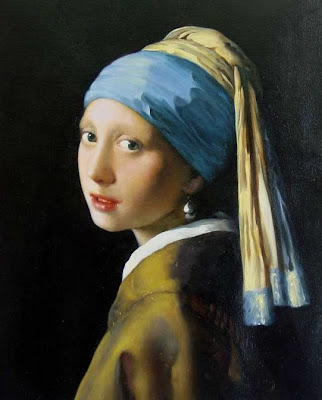 Posted by MauritaMason at 12:25 PM 2 comments: Links to this post

Several years ago, I sent a carton of Swiss-made, Russian cigarettes to a writer friend of mine. When asked how in the world I got them, this is how I replied:

After the cigarette plant's great purple flowers are buzzed by bees, their long, graceful stems (which look like ivory cigarette holders) begin to sprout tiny white cigarettes. This happens in a valley somewhere between the Alps and the Red Sea. The plants are nourished by pure mountain water and the pale Swiss sun. A pretty maid named Adelheid tends the plants carefully, protecting them from night creatures such as foxes and bums. When at last the moon is full and the cigarettes are ripe, Adelheid picks each one by hand and packs them into small boxes.

She gives the boxes to Tobias, who strings them on red ribbons from the legs of cuckoos, who have been fortified for their long flight on cheese and chocolate. The cuckoos are trained to make the arduous journey to Ukraine almost overnight. Sometimes they are shot down over Moscow by MiG fighters. Finally, the birds arrive at the home of Ivan and Kiska Solovyov, where they are fed Borscht and the cigarette packs are removed from their legs.

Then I order cigarettes on the internet and they're sent by international airmail from Ukraine, which takes about 5 weeks.

The cuckoos are much faster.

So I do have an imagination, after all. Occasionally I'm capable of writing fanciful things. But it's been a long time.
Posted by MauritaMason at 9:09 AM 1 comment: Links to this post

Prompted by a Bot

There was an email in my spam box just now from Polina. Polina asks in her subject line, "Hey, why do you not write?"

Well. That's a very good question, Polina. Why DO I not write? Because not writing is what I do.

I watched a film called Finding Forrester a few nights ago. The film stars Sean Connery as William Forrester, a reclusive writer who published one critically acclaimed novel, then disappeared. Forrester reluctantly takes under his wing a young black writer, Jamal Wallace, whose talent blossoms under Forrester's mentorship.

One of the scenes that stayed with me was when Forrester tells Jamal that "you write your first draft from the heart, and the second draft from your head."

My problem seems to be writing from my head too much. My head is full of critics who don't want me to write at all. It's funny; the critics think everyone else writes beautifully. The critics believe I have nothing important to say, and above all else, nothing interesting or entertaining.

This is why I do not write, Polina. I could give you a hundred other excuses, but I have given you the most valid reason. So stop emailing me.
Posted by MauritaMason at 2:45 PM 6 comments: Links to this post

Labels: who in the world is Polina?, writing

Call me The Light Bulb Bandit

After an already shitty day, my husband informed me this evening that the new owner of our former house (our former landlord's son) is telling people that we took all the light bulbs with us when we left.

Well...light bulbs are expensive. And I'm so frugal (NOT) that it only makes sense that I would steal light bulbs that might be considered "fixtures" by someone else.

No, I didn't take your f*&^%ing light bulbs, you douchebag. The only fixture I can think of that didn't have light bulbs in it when I left was the ceiling fan that hasn't worked for 15 years.

People are idiots.
Posted by MauritaMason at 6:25 PM 6 comments: Links to this post 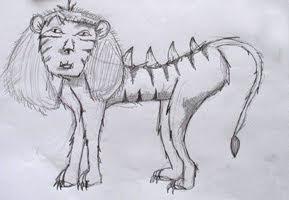 This morning I watched some animal program that showed the largest cat in the world - a liger - half lion, half tiger. This was especially surprising to me, because I thought the liger only existed in the imagination of Napoleon Dynamite.

I've become sort of an odd creature, too, since the move. You might call me by my latin name, Ancilla analus. My OCD has really kicked into high gear. Speck of lint on the floor? No way. Little orange flag sticking up from behind the satellite receiver? Gone, because it wasn't one of my colors. Bread crumb on the countertop, I laugh at you before I pinch you between my fingers and throw you in the trash. And heaven forbid there should be a streak on the glass tabletop. I hardly recognize the person staring back at me from the mirror as she battles a speck of something on the glass.

Too bad my behavior is only the result of newness. Give me a couple of months, then you can come over and hunt for dust bunnies under my sofa.
Posted by MauritaMason at 12:19 PM 1 comment: Links to this post

A few days ago I happened to pull up actor Johnny Depp's IMDb page, perhaps by accident, and I was stunned to see what he's working on simultaneously. Fifteen films in development. Two films in pre-production, two films in production, and three films in post-production. I realize, of course, that he isn't doing all of this alone, but just having committed to all those projects might be overwhelming for some.

This led me to thinking about the creative process in general. Is it fair that some of us spend most of our lives doing things we don't want to do? I don't think so. I would love to be constantly involved in creating something beautiful and lasting. Unfortunately, that isn't the case. At all. If creativity were measured on a scale of one to ten, I would be somewhere near...let's see...minus 100.

On the other hand, I do spend eight hours a day, five days a week making something. If I was a sculptor...but then again, no...(Elton John reference), I would have created, by now, about 100 Davids. My efforts in working for someone else might have yielded a few War and Peaces. Because, really - I'm not bragging, since it's the truth - I am the world's most prolific Aircraft Maintenance Work Card Package Creator.

So eat my shorts, Johnny Depp.
Posted by MauritaMason at 9:30 AM 6 comments: Links to this post

Rather than write some painful thing that would resemble nails on a chalkboard, I'm going to sleep, then try again tomorrow.
Posted by MauritaMason at 11:15 PM 2 comments: Links to this post

Out With the Old; In With the New

That phrase is especially meaningful to me this year, since we moved to a "new" home the first week of December. In fact, I turned over to the landlord the keys to our old house only the night before last. As much as I hate to admit it, I had a few emotional final moments at the old place, especially since I'd lived there almost half my life, my boys were raised there, and the rumor is that the old house is going to be torn down.

I've never been sure why I become attached to inanimate objects, somehow attributing to them a human quality. A little crazy, I know, but I do it anyway. So when I said, just before I walked out the door for the last time, "Goodbye old house; I love you," I felt that the house understood, and forgave me for abandoning it.

So today I'm a bit lost. Trying to embrace the new, but not exactly having bonded with it yet.

I guess that's what the next 364 days are for.
Posted by MauritaMason at 4:21 PM 6 comments: Links to this post