Putting it into Perspective

The number of people sickened with pneumonia in Mexico is 1,995 (of which 152 have died), and none of these illnesses have been confirmed as being caused by "swine flu."

50 cases of swine flu have been confirmed in the US, and no one has died as a result of the illness.

Would the media please shut the hell up.
Posted by MauritaMason at 9:08 AM 11 comments: Links to this post

My niece graciously asked me to help her photograph a wedding yesterday. You may not think so, but holding a camera for seven hours in various positions is pretty exhausting work - especially when the weather suddenly decides to warm up and you forget to drink any water.

I'll leave all the glory to my niece, but just wanted to share this photo I shot of one of the flower girls - 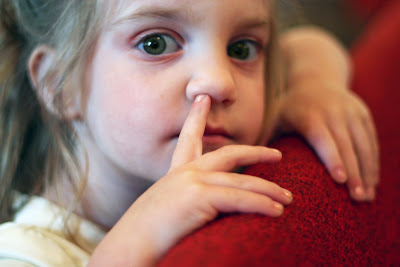 Cuteness.
Posted by MauritaMason at 2:06 PM 4 comments: Links to this post

Where have I been for the last 17 years?

His role in the 1992 film Scent of a Woman won Al Pacino the only Oscar of his career, for Best Actor.

And would you believe in all the years since 1992, I had never seen this movie? Not even parts of it.

It wasn't until I saw the title on my oldest son's list of favorites on Myspace that I decided to rent it from Netflix. I trust my son's opinions about films more than I do that Ebert guy.

If you've seen Scent of a Woman, I'd like to hear what you think of the film. And I leave you with this:

Posted by MauritaMason at 8:18 AM 10 comments: Links to this post

Labels: Al Pacino, films I love, Scent of a Woman 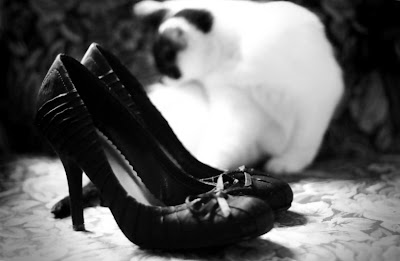 Please don't take it too seriously.
Posted by MauritaMason at 12:44 PM 10 comments: Links to this post

By the year 2023, McDonald's Corporation will have single-handedly exhausted the world's supply of salt.
Posted by MauritaMason at 12:01 PM 13 comments: Links to this post

Labels: how much salt is necessary to make your stuff taste like real food, warning salt shortage

I'm Melting! and other random stuff.

Since it's going to be at least 67 degrees tomorrow, I've already decided to wear a dress to work. It's a slim little black shift dress I bought last week, and I've been dying to wear it, but I don't like exposing myself to the cold and I didn't have exactly the right shoes to wear.

So, during lunch, I solved the second problem by going shoe shopping. I found the perfect shoes, but they weren't available in a size 8. So I decided to try a 7 1/2, even though I've never been able to fit my gargantuan feet in anything that small. I guess I shouldn't have been surprised that they fit, since everything else about me is shrinking too. Who knows how long I've been wearing shoes that are too big for me?

I was eating spaghetti at this little place called Bellacino's when Kurt Cobain appeared on the speakers singing Smells Like Teen Spirit. I don't know when I became old and passed over the threshold upon which lies the inability to listen to Nirvana, but I suspect it may have been the exact same moment when my feet got smaller.

There's a robin nesting in a small tree in my smoking area here at work. She has decorated her nest with brightly-colored items from the hangar. I may have to steal the nest when she's done with it. When I get home, I'll add to this post a photo of a wren's nest made of hair from my dog and horses, many of whom have passed on. I consider that gift from nature one of my most priceless treasures.
Posted by MauritaMason at 12:22 PM 13 comments: Links to this post

I've been instructed to never again write about the man who lives in my house. So please stop me if I do.
Posted by MauritaMason at 10:11 AM 10 comments: Links to this post

A sweet little hidden gem of a movie.

Last night, I forced my husband to watch a movie called Penelope, starring Christina Ricci and James McAvoy (who played Tom Lefroy in Becoming Jane). To be honest, I wasn't even sure if the film was worth watching, but we were soon captivated by the comical little fairy tale. 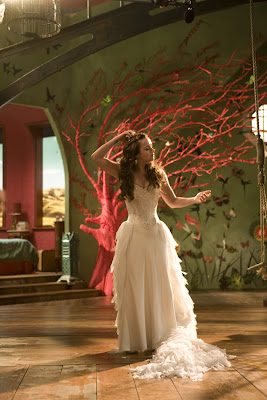 Ricci plays Penelope Wilhern, who was born under a curse placed upon her wealthy family by a witch seeking revenge for the death of her daughter. Penelope lives out her young life hidden away by parents who are ashamed of her pig snout, until the time comes when her parents seek to break the curse by finding Penelope "one of her own kind" to love her for who she is.

I won't reveal any more of the plot in case you want to see the movie for yourself. And I think you ought to, because a little magic is always fun, and it never hurts to be reminded that it's okay to like yourself the way you are.
Posted by MauritaMason at 5:48 PM 3 comments: Links to this post

I wanted my 100th post here at Blogger to be something brilliant and unique, which is one of the reasons I haven't posted. The other reason is that I haven't been feeling well, and I may have finally figured out why. Remember the mechanical bull I rode about 3 weeks ago? Whiplash, maybe. So all the pressure and pain I've been feeling in my head, neck and shoulders probably isn't stress at all, but a consequence of my stupidity.

So instead of the brilliant, unique post I meant to bring you, here is a meme I was tagged with by my very talented and witty niece, Marchelle:

THE RULES:
1. Link to the person who tagged you
2. Share 7 things that people may not know about you
3. Tag 7 people to share 7 things and link to them
4. Let them know they have been tagged

I'm too lazy to play tag, but feel free to play if you want.

1. RUN, FORREST! I was born with crooked feet. For the first year of my life, I wore my shoes on the wrong feet and was shackled with Forrest Gump leg braces. 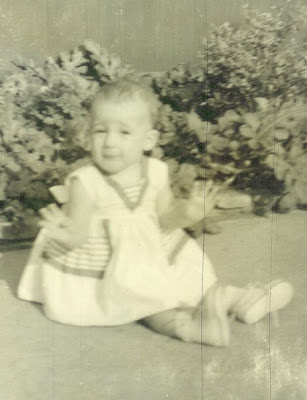 Seriously. Check out the shoes. Also note that I'm throwing up gang symbols.

2. I'm still convinced that the lyrics to Blinded by the Light really do contain the phrase "wrapped up like a douche." Do not defy me.

3. I would rather hear a man's voice than a woman's. Probably 99 percent of the songs I listen to are by male artists.

4. I want to state, for the record, that chili with pasta in it is not real chili. You people need to get over it. Freaks.

5. I'm pissed off about the PLANET Pluto. I even joined a group at Facebook called "When I was your age, Pluto was a planet."

6. Sometimes when I'm in pain, I sound exactly like I sound right now. Only it's worse when you can actually hear my voice. My voice will cut you.

7. I've developed short-term memory loss, which may result in me saying the same things over and over in this blog. And I only think of really interesting things about me while I'm driving, but they never get written down and I'm not able to remember them the next time I have to do one of these things. Also, the older I get, the more I want to type phonetically. Like won instead of one.

BONUS (because I cheated a little on some of those) - When I was very young, my dad swore pretty often. Most of the time he would say, "Pardon my French." I remember thinking that I wanted to grow up and learn French, too - and I'll be damned if I haven't!
Posted by MauritaMason at 9:04 AM 8 comments: Links to this post

Farm Boys on a Friday Night

One of the things that isn't a shock after raising three boys is middle-of-the-night phone calls.

This morning at 2:45, I looked at the caller ID on my phone with blurry eyes and felt the last name register in the back of my brain as exactly the same one as the former county sheriff. I answered anyway.

And not surprisingly, my sixteen-year-old son was on the other end.

"Mom?" he said, "Me and Zach were out driving around and ran off the road. We're okay, but the truck's a little messed up. The sheriff wanted me to call and let you know what was going on."

To be honest, I don't remember what I said. I was calm, and very very quiet, because I was already debating the idea of whether to let my husband in on it. I asked if there had been any drinking, and my son said no. My extrasensory skills must have been working earlier in the evening when my son said he was going to his brother's house for a party, and I reviewed with him all the possible consequences of getting caught drinking, as a high school athlete and a 16 year old. Being the youngest of three boys apparently has its advantages - one of the things my son likes to say is "I've learned from my brothers' mistakes." This covers a lot of territory, including girls.

I was glad the boys were unharmed. But I was worried about the truck, because it used to belong to my dad. So after I roused my husband with the news and we showed up on the scene of the accident (both of us - I was told I was there to keep my husband "from killing our son"), imagine my relief when we realized it had been the other kid that was driving, in his own truck. It was pretty banged up, on both sides, and it appears to be skewed a little. They hit the trunk of a blue spruce on one side, flipped around, and hit a mail box on the other side. And then a trash bin.

The owners were standing out in the yard, hugging themselves against the cold and looking angry, along with another homeless-looking guy who had apparently been sleeping in a van outside. I share this information to perhaps shed a little light on the caliber of the residents. The boys had already discussed with the owners their plans to clean up the damage, including replacing the mailbox and cleaning up the trash.

Both of the boys were just here after going to pick up the trash, which my husband says "has been laying all over the yard all week." He knows this because he drives his school bus past their house twice a day. And the 25-foot blue spruce they hit? Well, the lady who lives there must love that tree an awful lot. She says it is worth two thousand dollars, and she'd like to have the money to replace it, even though only a few branches are missing from the bottom.

This irritates me just a little. Here's a situation where the boys are willing to do the right thing to rectify what they've done, and the "victims" have to be assholes about it.

But, you know...it could be Karma biting them in the ass. Because here's what they'd done to Zach's sister's car just before the accident. She'd left it parked in the school parking lot to go somewhere with a friend, with whom she was spending the night. 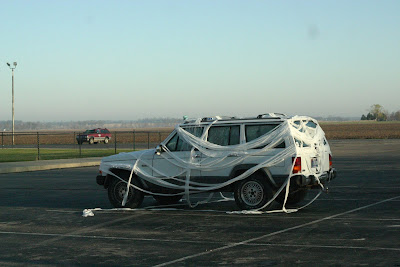 I like the plastic wrap, and the two bars of soap skewered onto the antenna the best.

Maybe I'm a terrible mother, but it's hard for me to be angry or stern about any of this. I see it as a character-building experience, and all a part of growing up. And the truth is, no matter how many things we learn from others' mistakes, we always learn best from the ones we make on our own.
Posted by MauritaMason at 9:29 AM 14 comments: Links to this post